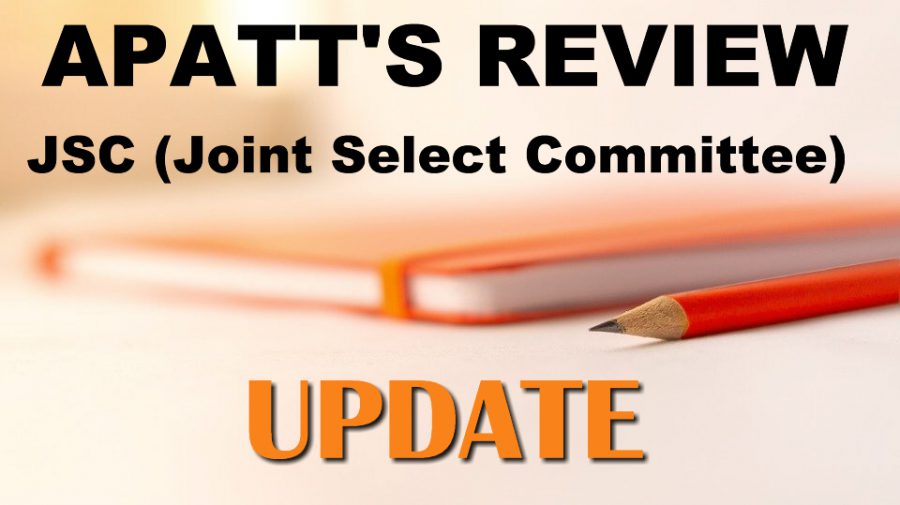 On the 7th July, 2019 APATT wrote a review on the JSC (Joint Select Committee) on Human Rights, Equality and Diversity Inquiry that was held on July 5th, 2019.  Prior to this inquiry, APATT, along with other NGO’s were asked relevant information about the present state of Special Education in Trinidad & Tobago. We have received an update from the JSC about the outcome of that inquiry and we would like to share some of the points, recommendations and discussions that were brought forward.

The following are some of those points and our comments however there are many more therefore, we ask our parents to read the committee’s report since all of this affects your child directly. This report also includes the internal procedure for Special Concessions (page 165).

1. According to the Committee, there are 3,735 students approximately that require Special Education Services. However, the committee stated that they experienced difficulties to definitively determine the number of students due to the fact that the MOE’s data of confirmed and suspected cases of children with disabilities was just an estimate.

APATT: The 1966 Education Act of Trinidad and Tobago included a statement on provision for students with disabilities, and in 1981 the Special Education Unit was formed. Consequently, the Student Support Services Division was created in 2004. Is the Ministry stating that within 54 years, 39 years and 16 years respectively has not been enough time to obtain robust figures and not simple estimates?

The Committee also noted an absence of collaborative efforts between the MOE and the Central Statistical Office (CSO) to determine the number of children with disabilities as well as that both the MOE and CSO having different definitions for ‘disability’. Even though The MOE stated that the CSO definition excludes a number of students with a disability, it is important to mention that the MOE data excluded children with a disability outside of the school system as well as an absence of a comprehensive assessment and screening process for children.

APATT: It is important to highlight that the MOE’s estimates, excludes children with disabilities outside of the school system. Many autistic children, who are not in the public school system because there are no public schools with qualified teachers that can cater for their specific needs, are left behind. APATT would like to find out exactly what the Ministry of Education has done in order to reach out and include the children who are outside the educational system due to no fault of their own. This situation exists because of the sore negligence of the state.

In both, the category of learning disabilities was attributed to the highest numbers of suspected cases of disabilities.

3. In the report, there is mention that the MOE has as its disposal, (40) schools equipped with infrastructural facilities for students with special education needs (see Table 6 for a list).

APATT:  How are these schools equipped to cater for the needs of autistic students specifically and has the MOE shared this list to NGO’s and other stakeholders for their perusal and feedback?

4. The Committee advised that the MOE develop a strict monitoring mechanism to eliminate all cases where a child with a disability is denied entry to public primary and secondary schools of their choice.

5. The Committee noted that the submission of insufficient documentation (as well as late stage submission) was the primary reasons for the non-approval of a concession application (according to the MOE).

The MOE data for the academic years 2016/2017 and 2018/2019 indicated there were eight (8) concession applications received and approved from public special needs schools. The Committee recommended that the MOE publishes the examination concession application guidelines and the current concession provisions on the Ministry’s website in an accessible multimedia format as soon as possible.

APATT: Where is this information posted in the Ministry of Education website per the recommendation?

6. Special Education Teacher Aides: The MOE took the standpoint that a candidate for the position of Special Education Teacher Aide must have a willingness to work with a child with a disability and upon receipt of internal training is tasked to provide support service to the child. The Committee restated the importance of qualified staff in adherence with Article 24(2)(e) of the UNCRPD that states, “State parties shall ensure that Effective individualized support measures are provided in environments that maximize academic and social development, consistent with the goal of full inclusion.”

Therefore, the Committee recommended that the MOE conducts a consultation with disability stakeholders, in order to achieve consensus on the qualification requirements for a Special Education Teacher Aide.

As of May 2019, the MOE reported a demand of 369 student aides and as of August 2019, four educational districts have indicated that requests to the OJT programme have been made for 60 additional OJT aides assigned.

APATT: It was important to notice the committee’s recommendation because it highlights the paramount importance of proper qualifications for someone who wants to work as a student aide. These students have very specific needs that require serious and proper training as well as adequate professional qualifications. So far, the MOE has been using OJT personnel to work with special needs students since their qualification criterion has been merely a “willingness to work with special needs students”.

Please note that APATT’s President was present in a meeting where SSS personnel stated something disturbing. If your child has a formal diagnosis done by a professional and it is recommended that your son/daughter needs a student aide in the classroom in order to facilitate his/her learning as well his/her integration in the classroom, it is ultimately the Ministry of Education’s decision whether or not your child needs a student aide regardless of your child’s formal diagnosis and recommendations?

It is very troubling that a student who needs a student aide (per the recommendation of his/her psychologist) ultimately might not be able to get it because the MOE might not find the student needs it.

7. According to the MOE, they plan to fill vacancies in the following positions:

a. Nine (9) contract vacancies for the position of Clinical Psychologist by the end of December 31, 2019.

b. Seven (7) contract vacancies for School Psychologist will be re-advertised by the end of April, 2020.

d. Sixty (60) OJTs to be assigned as Special Education Teacher Aides by September 2019.

APATT: It should again be stated: Since 2017 and as of March last year, out 11 policy actions, the MOE has completed 2.

b. Forty(45) positions are expected to be re-advertised in order to be filled.

c. There are three hundred and fifty-two (352) contract positions and two hundred and sixty-four (264) contract vacancies (without bodies) for special education staff within the Student Support Services Division.

APATT: Where are these 89 positions going to be filled? Are these teachers going to be stationed in one particular school or are they going to be moved from one school to the other?

10. MOH data as at August 27, 2019 indicated that there are three (3) registered occupational therapists employed by the Regional Health Authorities (RHA). However, submissions from the University of the Southern Caribbean outlined that as at May 28, 2019, there is one (1) full-time occupational therapist in the public school system.

APATT: This data seems contradictory; nevertheless whether are 3 occupational therapists or 1 to serve the special needs students of the entire NATION, what exactly is the Ministry doing to address this unacceptable shortage?

11. According to the report, during the period2016 to 2019,the MOE indicated that the average waiting period between the assignment of an assessment to a clinical psychologist to the parent’s receipt of a diagnosis report is an average of three(3) to four (4) months. This prolonged waiting period was further reiterated, as students awaiting assessment as at the end of the academic year 2018/2019 had a waiting period of one (1) to two (2) years between referral and diagnosis.

APATT: It is disingenuous and misleading to state that the average waiting period between the assignment of an assessment to a clinical psychologist to the parent’s receipt of a diagnosis report is an average of 3 to 4 months, it is absurd and borderline disrespectful. Parents are waiting for years to receive such a report and in many cases; they have contacted the SSS division and have not received the help they are seeking.

APATT logged on to the Ministry of Education Web site (May 18th, 2020) to check if the recommendations that the committee gave to the MOE (see point #5) has been fulfilled. There was a block for “Special Education” but it was not accessible (no link) neither were we able to access any information about Special Concessions.

It is truly a disgrace, at this point in time, that children with special needs in T&T continue to be at the mercy of those who erroneously believe they are doing well enough — this report highlights it is quite the opposite.