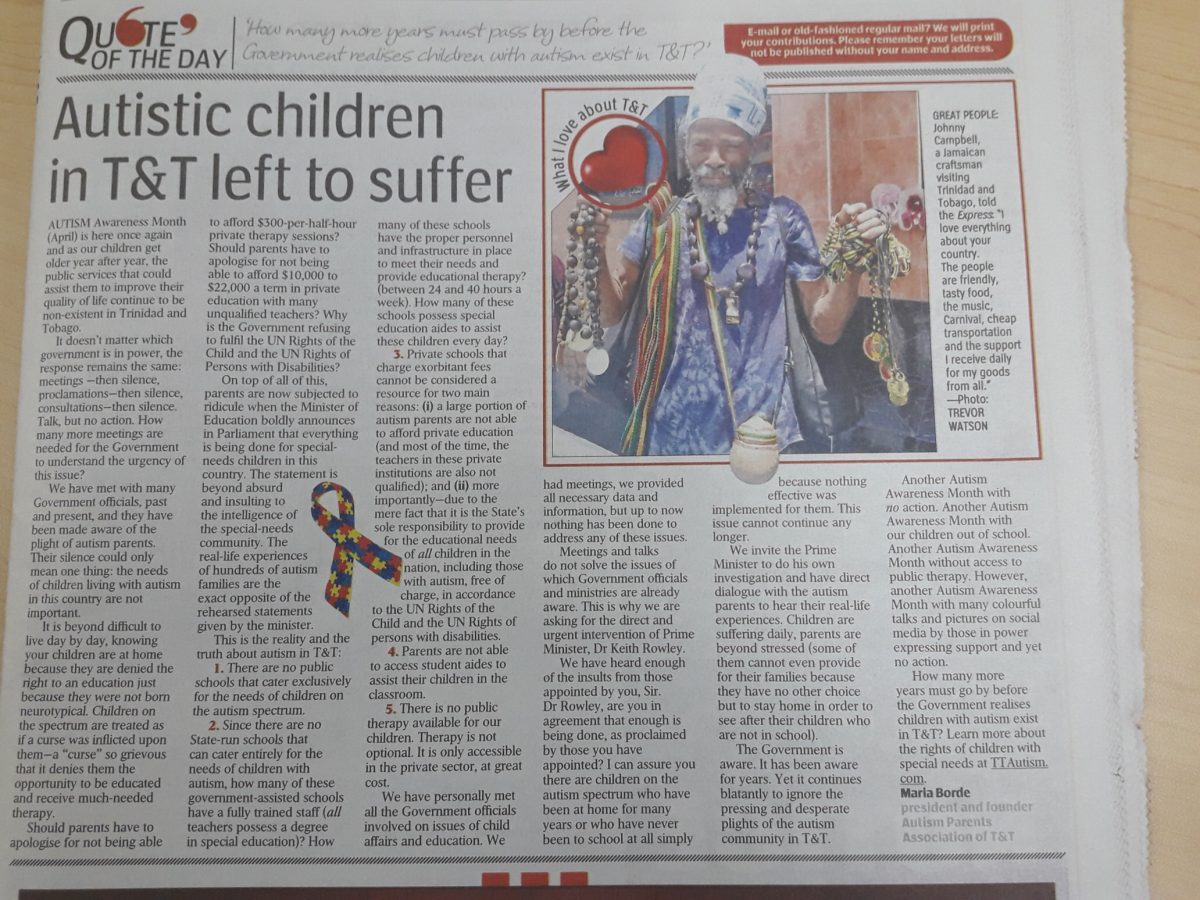 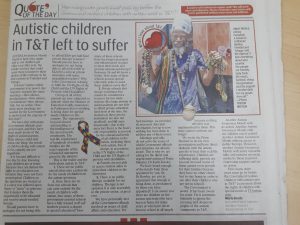 This is the full version of the article:

Autism Awareness Month is among us once again and as our children get older year after year, the public services that could assist them to improve their quality of life continue to be non-existent in Trinidad & Tobago. It doesn’t matter which government is in power, the response remains the same: Meetings — then silence.

Proclamations — then silence. Consultations — then silence. Talk but no action. How many more meetings are needed for the government to understand the urgency of this issue? We have met with many government officials past and present and they have been made aware of the plight of Autism parents. Their silence could only mean one thing: The needs of children living with Autism in this country are not important.

It is beyond difficult to live day by day knowing that your children are at home because they are denied the right to an education just because they were not born neuro-typical. Children on the spectrum are treated as if a curse was inflicted upon them. A ‘curse,’ so grievous, that it denies them the opportunity to be educated and receive much needed therapy. Should parents have to apologize for not being able to afford $300 per half an hour private therapy sessions? Should parents have to apologize for not able to afford $10,000 to $22,000 a term in private education with many unqualified teachers? Why is the government of Trinidad & Tobago refusing to fulfill the UN Rights of the Child and the UN Rights of persons with disabilities?

On top of all of this, parents are now subjected to ridicule when the Minister of Education boldly announces in Parliament that everything is being done for special needs children in this country. The statement is beyond absurd and insulting to the intelligence of the special needs community in T&T. The real life experiences of hundreds of Autism families are the exact opposite of the rehearsed statements given by the Minister.

This is the reality and the truth about Autism in Trinidad & Tobago:

1. There are no public schools in Trinidad and Tobago that cater exclusively for the needs of children on the Autism Spectrum. As we have stated many times in the past and in our meetings with several government officials, we do not believe that lumping children with different kind of disabilities under the label of “special needs schools” is neither a help nor a solution. Government-assisted schools are not state-run schools. Sitting down by a desk and writing may work for a few on the spectrum but by enlarge many cannot sit down and be expected to do the same work as the typical child in a public school. The correct infrastructure and right teaching for a child on the Autism spectrum has to be done through holistic methods that only trained special education teachers will know how to implement.

3. Private schools that charge exorbitant fees cannot be considered a resource for two main reasons: One, because a large portion of Autism parents are not able to afford private education (and most of the time, the teachers in these private institutions are also not qualified) and second and most importantly due to the mere fact that it is the state’s sole responsibility to provide for the educational needs of ALL children in the nation, including those with Autism, free of charge in accordance to the UN Rights of the Child and the UN Rights of persons with disabilities.

4. Parents are not able to access student’s aides to assist their children in the classroom. These aides, in its majority, are reported to be OJT personnel with no proper qualifications. Therefore, how are they expected to assist children on the Autism Spectrum? Yet we are being told that the Student Support Services is over staffed. How can the SSS have more than its compliment of workers and yet parents are told that they do not have enough personnel to attend to their child?

5. There is no public therapy available for our children. Therapy is not optional. It is only accessible in the private sector at great costs.

We have personally met all the government officials involved on issues of child affairs and education. We had meetings, we provided all necessary data and information but until now, nothing has been done to address any of these issues. Meetings and talks do not solve the issues that government officials and ministries are already aware of.

This is why we are asking for the direct and urgent intervention of the Honourable Prime Minister, Dr. Keith Rowley. We have heard enough of the insults from those appointed by you Sir. Dr. Rowley, are you in agreement that enough is being done as proclaimed by those you have appointed? I can assure you, there are children on the Autism spectrum who have been at home for many years or who have never been to school at all simply because nothing effective was implemented for them. This issue cannot continue any longer. We invite the Prime Minister to make his own investigation and have direct dialogue with the Autism parents to hear their real life experiences. Children are suffering daily, parents are beyond stressed (some of them cannot even provide for their families because they have no other choice but to stay home in order to see after their children who are not in school).

In a nutshell: Autism In T&T

This website uses cookies to improve your experience while you navigate through the website. Out of these, the cookies that are categorized as necessary are stored on your browser as they are essential for the working of basic functionalities of the website. We also use third-party cookies that help us analyze and understand how you use this website. These cookies will be stored in your browser only with your consent. You also have the option to opt-out of these cookies. But opting out of some of these cookies may affect your browsing experience.
Necessary Always Enabled
Necessary cookies are absolutely essential for the website to function properly. This category only includes cookies that ensures basic functionalities and security features of the website. These cookies do not store any personal information.
Non-necessary
Any cookies that may not be particularly necessary for the website to function and is used specifically to collect user personal data via analytics, ads, other embedded contents are termed as non-necessary cookies. It is mandatory to procure user consent prior to running these cookies on your website.
SAVE & ACCEPT